As we go to press, the financial media is aflutter with news of inverting yield curves in the US and UK, an outright contraction in German economic activity, and China’s slowest growth rate in nearly three decades. These are four of the planet’s seven largest economies (and #3 Japan isn’t seeing much in the way of growth either), together representing approximately 60% of the world’s total output. More than a decade after the Great Financial Crisis, the global economy is showing signs of stalling, raising the odds of a coordinated economic contraction in the coming year or two.

From our perspective, there is a clear catalyst for that could tip the global economy into recession (the US-China trade conflict) and unlike previous growth shocks, policymakers have limited ammunition in both monetary (interest rates and quantitative easing) and fiscal policy (tax cuts and spending increases) to keep the expansion alive.

This January will mark the two-year anniversary since US President Trump imposed tariffs on Chinese solar panels and washing machines. Like the marital dispute over dishes that escalates into infidelity and divorce, political leaders on both sides of the Pacific have intensified the conflict at every turn, leading to the full-blown trade and currency war that we see today. The ongoing dispute has already upended global supply chains, delayed business investment, and shook economic confidence across the globe… and the costs are poised to grow exponentially from here.

As the chart below shows, global manufacturing PMI, a timely measure of manufacturing activity across the globe, peaked the moment Trump imposed those first tariffs and has consistently declined as trade tensions have escalated, with the measure now showing outright contraction (a sub-50 reading) for the first time in seven years! 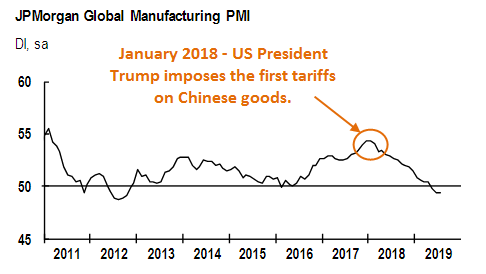 More to the point, the full brunt of the trade conflict has yet to be felt for consumers in the world’s two largest economies. In addition to accepting slightly lower profit margins, importers on both sides of the Pacific accelerated purchases to minimize the impact of upcoming tariffs, leaving port warehouses filled to the brim. As these inventories are drawn down, consumers will see a steady rise in prices, reducing their discretionary spending.

Unlike consumers, international businesses have already been forced into hard choices. In an effort to skirt the US-China tensions, companies have been increasingly setting up manufacturing operations in other Asian countries such as Vietnam, Thailand, and Taiwan: 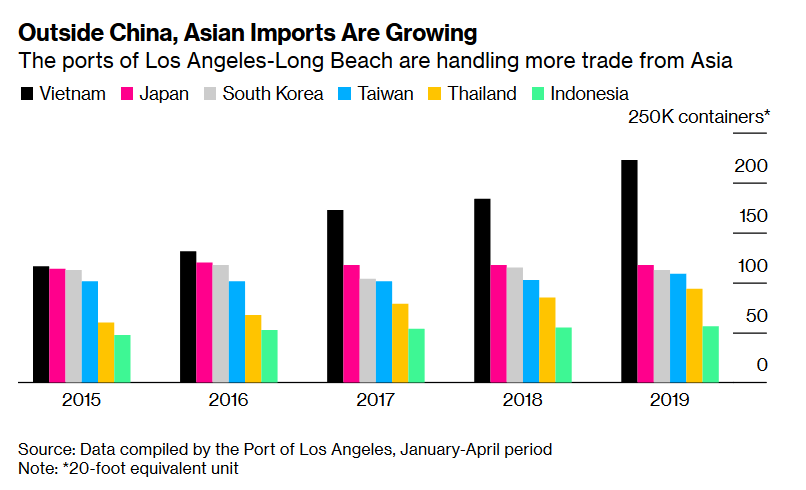 While some international firms have accepted the heavy capital expenditures to build manufacturing plants in other countries, others have put expansion plans on hold altogether. Rather than risk another round of tariffs or trade restrictions, many executives are battening down the proverbial hatches and preparing for a slowdown in demand. Paradoxically, individually-logical choices to postpone investments can become a self-fulfilling prophecy in aggregate, bringing about the very economic contraction the firms seek to circumvent! Of course, the relentless stream of negative trade war headlines also depresses consumer spending at the margin.

The Trade War Transforms into a Currency War

More worryingly still, the US-China trade war has started to morph into a currency war. China recently allowed its currency to depreciate below 7.00 against the US dollar for the first time in over a decade, prompting the US Treasury to accuse China of currency manipulation: 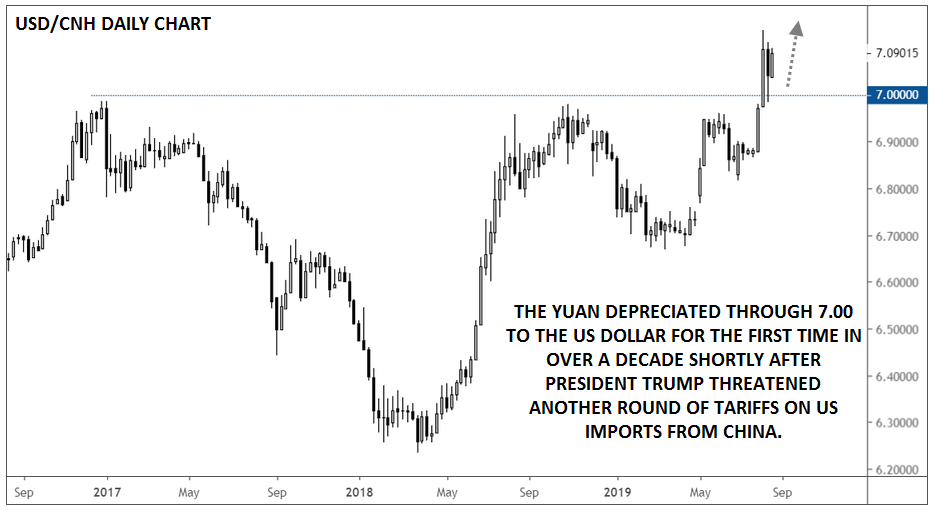 To be clear: China is not (yet) manipulating its currency lower; rather the People’s Bank of China (PBOC) is removing its artificial support for the renminbi, allowing market forces to play a bigger role in the currency’s value. That said, the effect is the same: a cheaper renminbi makes Chinese exports more competitive overseas, partially offsetting the impact of US tariffs.

As a result, other export-oriented countries (including developed markets like Japan, Australia, and New Zealand) must decide whether to take actions to weaken their own currencies or risk losing international business to rivals. Taken to the logical conclusion, equivalent competitive currency devaluations lead to little economic benefit for the countries involved and higher prices for commodities with limited supply, including bitcoin, as the chart below shows: 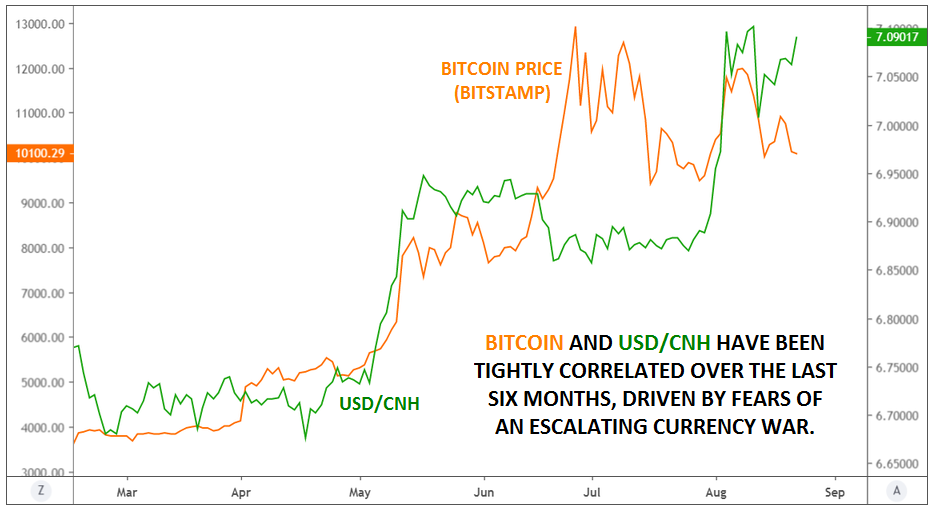 Put simply, as wealthy Chinese citizens see the purchasing power of their earnings and assets decline, alternative “stores of value” that are governed by computation rather than the myopic whims of policymakers look more attractive; indeed, the 180-day correlation between USD/CNH and bitcoin is hovering around 0.75 as of writing in early September. While these flows have been relatively small so far, reflecting the limited depreciation of the yuan, a more rapid depreciation in China’s currency could lead to an explosive move higher in crypto markets, given their small market capitalization.

Meanwhile, on the other side of the Pacific, President Trump has been exhorting Fed Chairman Jerome Powell to cut interest rates aggressively to keep the US dollar from strengthening relative to the yuan and other rival currencies. Some analysts believe that President Trump is intentionally escalating the trade war to force the Fed to cut interest rates, and that he will subsequently remove all tariffs to goose the economy in the runup to the 2020 US election. While such a scenario is possible, especially if the stock market falls sharply, we’ve learned to be skeptical of any “four-dimensional chess” explanations for Trump’s actions. It seems far more likely that Trump is using his bully pulpit to address the US trade deficit with China, which he views as one of the country’s biggest issues.

Regardless, once an international company has retooled its global supply chain and target markets, it’s impossible to go back to the previous configuration. Even if the trade war were to end tomorrow, the new paradigm will persist, with both the US and China representing a smaller portion of global economic activity. Given that those two countries together represent 40% of the already slow-growing global economy, we wouldn’t be surprised if the US-China trade war is the factor that pushes the planet into recession in 2020 or 2021.

If we do see the current US-Sino tensions drag the global economy into a manufacturing-led recession, the relative winners would be countries with efficient industrial operations and good relations with both world powers. By capturing a larger share of the “reshuffled” global supply chains, countries like Vietnam and Thailand could outperform other emerging market rivals. A demand-driven decline in energy prices could also help new manufacturing operations reach profitability more quickly.

As we’ve recently noted, there are reasons for fear, uncertainty and doubt about the traditional financial system. Rising sovereign debt levels and political dysfunction hamper the ability of policymakers to provide fiscal stimulus if economic activity sputters. Meanwhile, with global interest rates still at historically low levels and several post-GFC quantitative easing programs still running (paging the ECB and BOJ), central bankers have little in the way of stimulative monetary policy to offer before resorting to unproven, unconventional methods again.

…So what would a global economic contraction mean for cryptoassets?

The short answer is that no one knows.

Bitcoin, the world’s oldest cryptoasset, was created in the depths of the Great Financial Crisis and has therefore never experienced a full global recession. Given the rapid adoption and technological innovation in the cryptoasset space, any data on past economic contractions wouldn’t be particularly relevant in any event. Speaking generally, the majority of cryptoassets essentially support early-stage projects with few end users. Therefore, in a global recession, many investors may view their cryptoasset holdings as risky, equivalent to liquid venture capital holdings; in that way, many so-called “altcoins” may be among the first things that traders sell in an adverse economic environment.

That said, there could be two major exceptions to that trend. Our past studies have shown that bitcoin has benefitted from regional financial crises in the past; presumably, bitcoin and other cryptoassets that are viewed as safe havens and/or independent forms of money (Litecoin, Monero, Dash, Zcash) may also outperform in the event of a coordinated global slowdown, especially if central banks are forced to resort to unprecedented stimulus measures once again.

The other exception requires a bit more nuance to understand. Using the model of Gartner’s Hype Cycle, the broad cryptoasset market reached “Peak of Inflated Expectations” at the start of 2018, when enthusiasm for the potential of crypto networks exceeded their functionality: 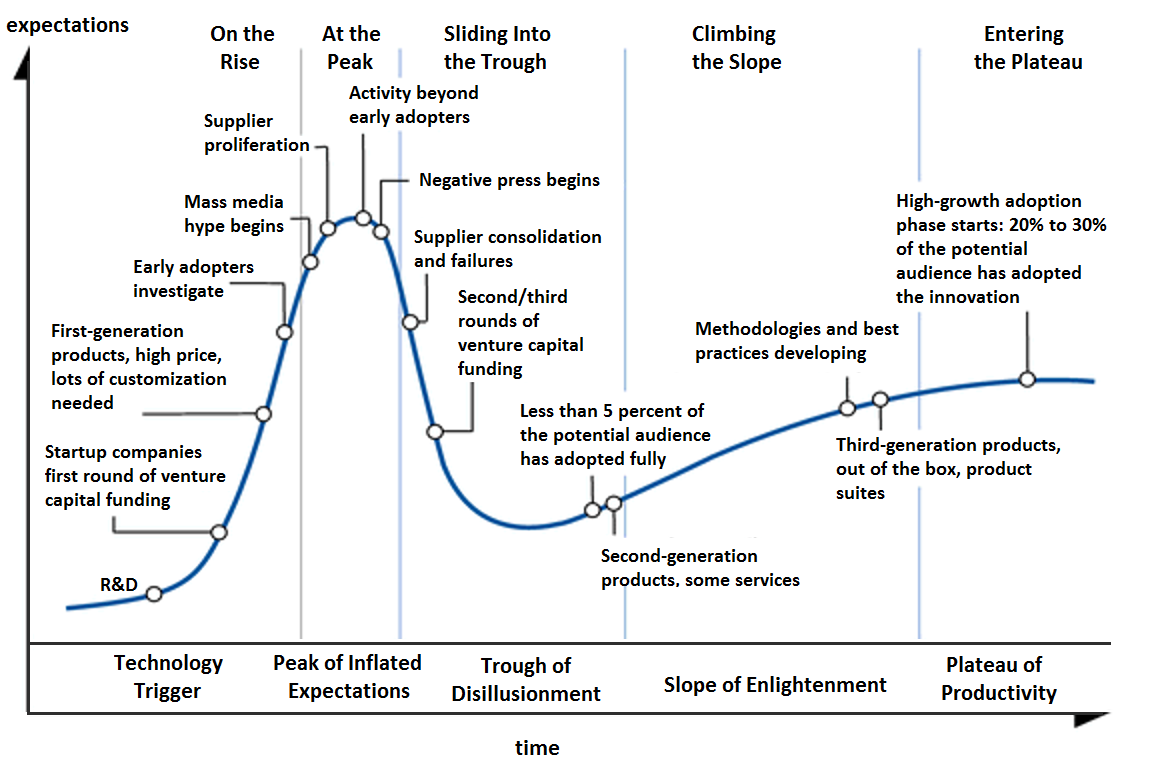 Make no mistake: Cryptoassets will fundamentally revolutionize digital commerce in the first half of the 21st century, just as personal computers and the advent of the internet transformed the late 20th century. Pet supply delivery company Pets.com is often used as the quintessential example of turn-of-the-century technology bubble excess, but after two decades of technological development, a substantially identical business (Chewy.com) now does USD $1B in sales and trades with a $12B market capitalization. In the same way, some of the more ambitious cryptoasset ICOs from the last couple years may be simply premature rather than poor ideas.

Two of the world’s most valuable companies on the planet today – Amazon and Alphabet (Google) – were launched during the technology bubble. The key to identifying these remarkable performers was to focus on business operations, prudent leadership teams, and innovative products with strong product-market fit; this same mindset will apply to crypto projects. Of course, identifying such exceptional operations in the nascent cryptoasset space requires extensive due diligence and deep industry expertise. In the months to come, the Blakeley team will be highlighting projects that we believe have the potential to outperform over longer time horizons, come economic hell or high water.

As a teaser, we’re keeping a close eye on the potential of the Polkadot network and Substrate framework as a possible contender for Ethereum’s throne as the biggest smart contract platform. Stay tuned for our deep dive on the project ahead of the mainnet launch later this year!