Skip to content
What Drives Bitcoin? The Sources of Supply and Demand

What Drives Bitcoin? The Most Important Sources of Supply and Demand

“It’s not backed by anything”

“It’s only used to buy drugs on the internet”

“What if the government bans bitcoin?”

The above stylized quotes represent just a smattering of the misconceptions and criticisms of bitcoin. For most citizens of the developed world, and many more traditional investors, misunderstandings about the fundamental drivers of bitcoin and other cryptoassets lead to widespread skepticism and doubt, preventing adoption and investment in one of the most revolutionary technological breakthroughs of the 21st century. Naturally, we wanted to address these concerns and explore the true fundamental drivers of bitcoin’s value to help our readers develop a framework for putting price movements in bitcoin into the proper context.

As any Economics 101 textbook will tell you, the value of any product or service ultimately depends on its supply and demand, but that statement is generic enough to be useless on its own, so we delve into more detail on the specific factors driving supply and demand for bitcoin and other cryptoassets below:

When it comes to bitcoin, the aggregate supply side of the equation is relatively easy to analyze: the underlying computer code specifies that total supply will ultimately reach 21,000,000 BTC around the year 2140, with the issuance of new bitcoin to miners that maintain the network getting cut in half roughly every four years (including most recently in early May of this year – see our video analysis of the event and its implications for bitcoin’s price here).

As of writing, nearly 18.4M (or around 87%) of the total 21M bitcoin has already been created, so it’s worth focusing on the existing supply of bitcoin first. Similar to the traditional global fiat economy, the vast majority of the wealth in the bitcoin ecosystem is held by a relatively small group of “whales.” As the table below shows, fully 87% of the outstanding bitcoin is held by wallets with at least 10 BTC ($90,000+ USD at current valuations). Even more notably, a mere 16,105 wallets with over 100 BTC (0.2% of the total wallets) control over 60% of the total supply of outstanding bitcoin!

Given their tremendous holdings, even unconfirmed rumors of selling by such whales is enough to put pressure on bitcoin’s price; that said, analysis of blockchain transactions shows that these BTC “whales” are primarily long-term holders that accumulate during pullbacks but rarely sell, except occasionally when prices reach bullish extremes. The fact that the majority of outstanding bitcoin is held by such dedicated “hodlers” means that the actual circulating supply of bitcoin is far lower than the 18.4M, so relatively small changes in demand can lead to a big change in the price of bitcoin.

The other noteworthy stakeholder group that regularly sells bitcoin is miners. As we noted in our halving video, the daily supply of bitcoin generated by these miners recently fell from around $16M USD/day to $8M, sharply reducing a daily source of bitcoin selling pressure. As a result of the immediate drop in the block mining reward, many of the smaller, less profitable miners have been forced to turn off their machines, driving down the networks hash rate (the aggregate computing power securing bitcoin’s blockchain).

Every mining operation has a different profile depending their equipment and electricity charts, but in aggregate, miners’ breakeven bitcoin price is likely in the $12,000-$14,000 range at the moment, suggesting that miners will be forced net sellers of bitcoin in the near term to reduce the losses on their operations until bitcoin’s price rises or bitcoin’s difficulty adjustment falls far enough. Finally, readers should also monitor the fees associated with bitcoin transactions; since the halving, these fees have accounted for a larger proportion of miner revenue, and they’ll be an increasingly important factor to watch moving forward: 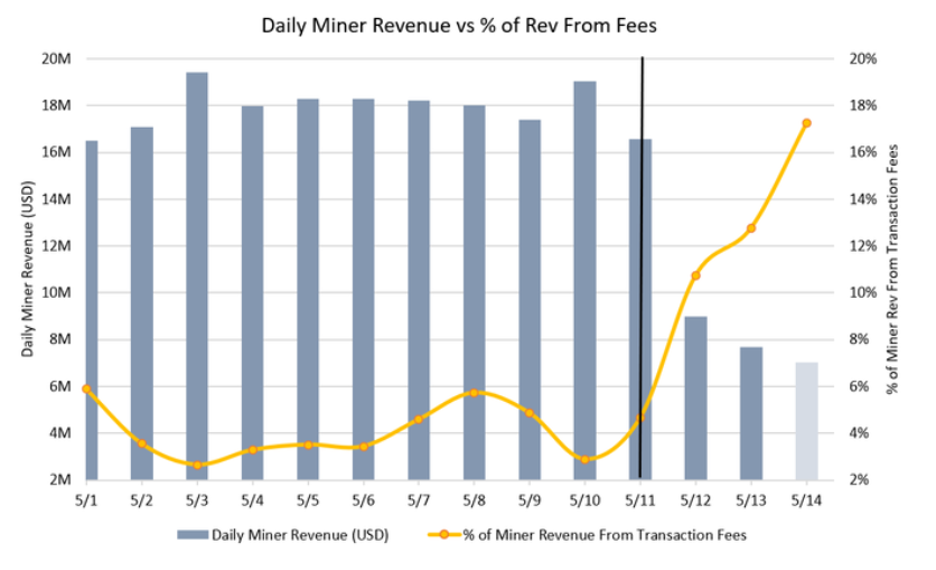 Unlike the emergence of almost every other asset class in history, the cryptoasset markets were led by individual enthusiasts, rather than traditional financial institutions like banks and investment funds. Now though, with an aggregate market capitalization around $250B as we go to press, those “late to the party” institutional investors will have to start participating to drive the next leg higher in cryptoasset values.

In general, these institutional investors prefer trading futures, which offer more liquidity and flexibility than the underlying spot bitcoin market. It’s for this reason that bitcoin often sees an outbreak of volatility around futures expiration dates. Looking at futures volume as of the start of May 2020, the most important exchanges are Huobi, OKEx, Binance, and BitMEX, which account for over 80% of the $20M+ daily bitcoin futures volume, whereas more widely-watched exchanges like the CME and Bakkt are still struggling to gain traction: 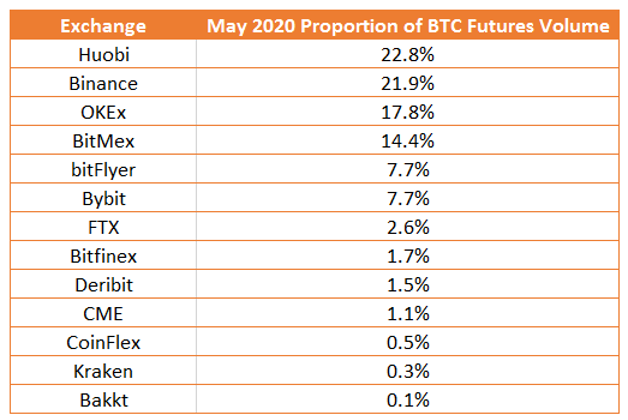 Moving forward, growing institutional participation will be one of the most important drivers to watch for bitcoin’s price. Billionaire fund manager Paul Tudor Jones recently made headlines by announcing that his fund would be buying bitcoin, for which he sees “a growing role” as a hedge against “The Great Monetary Inflation” in the post-COVID era.

Though it only represents “a low single-digit percentage” of his portfolio, it still shows growing institutional interest and could meaningfully move prices given the constrained supply we outlined above. What Jones is referring to, beyond the impressive past price returns, is the longer-term correlation between bitcoin and other liquid asset classes.

As the chart below shows, bitcoin has been positively correlated (r > 0.75) with other major cryptoassets, but relatively uncorrelated (r < 0.25) with more traditional investments like the S&P 500 and gold over the past year:

Make no mistake: Bitcoin’s correlation to these traditional investments has increased over time, and likely will continue to do so moving forward as it becomes more widely adopted, but as long as it remains relatively uncorrelated, it will be a compelling investment for institutional investors. As it stands, institutional demand remains fairly thin on the ground, so the next couple of years will be a critical test of whether bitcoin, and the cryptoasset markets more broadly, can “break through” as a legitimate, professional asset class.

The other potential major source of demand is what Satoshi Nakamoto envisioned in the initial white paper: “a peer-to-peer electionic cash system.” While the narrative surrounding bitcoin has evolved into a censorship-resistant store of value investment, developers continue to add functionality to the bitcoin ecosystem to improve its utility (and therefore demand) for commercial purposes. Next year brings planned upgrades like Schnorr Signatures and Taproot, which will increase privacy. Meanwhile, bitcoin’s second-layer Lightning Network continues to see adoption, making it easier for individuals and businesses to use bitcoin for cheap, immediate transactions. Time will tell if these fundamental improvements ultimately lead to increased adoption and demand for bitcoin, but it’s certainly an area that could propel the original cryptocurrency to new heights in the months and years to come.

Following this overview, our readers should have a strong grasp of the most important factors driving bitcoin’s supply and demand (and therefore its price) moving forward. By keeping a close eye on bitcoin whales, miners, institutional investors, and commercial usage, astute observers can gain valuable insights on future price movements ahead of the crowd!