Skip to content
Centrality Seeks to “UNf*ck the World”, Rapid Adoption Shows Developers Are Buying In

Anyone perusing a cryptoasset “biggest gainer” list in early October may have noticed an unfamiliar entrant: Centrality’s CENNZ token, which rose by as much as 800% against industry-standard Bitcoin in the first two weeks of October alone: 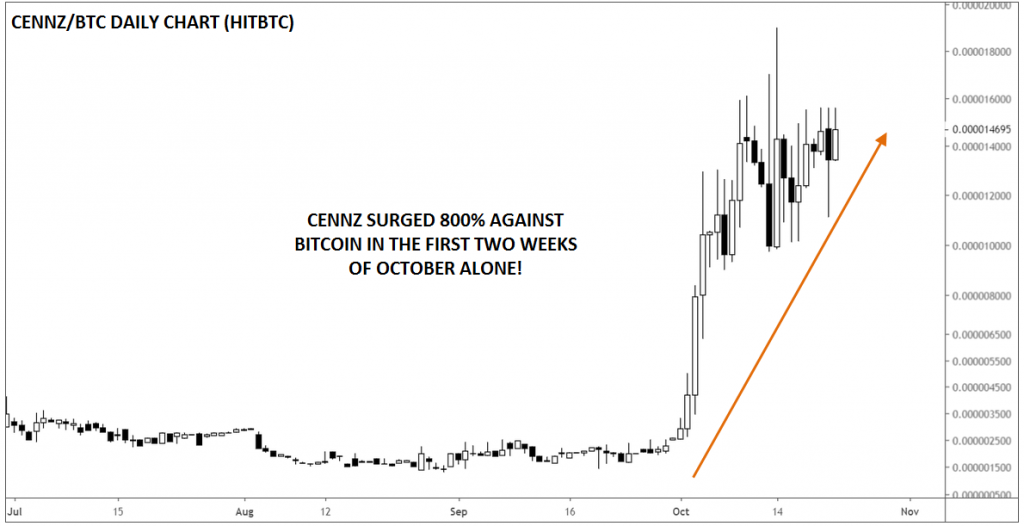 As we’ve all learned, a mid-cap token rocketing higher is a daily occurrence in the cryptoasset markets, but what makes the big rally in CENNZ noteworthy is the accompanying fundamental developments.

According to the company’s website, Centrality is “a platform that connects start-ups within [their] ecosystem… [to] help each other to acquire users, services, content and merchants, allowing them to scale faster and giving their users a richer experience.” In essence, the firm seeks to equip entrepreneurs with the essential modules and resources to compete with entrenched corporate titans.

If you’ve been involved in the space since “ICO Mania” in 2017, you’ve certainly heard about your fair share of promising, cutting-edge projects poised to revolutionize commerce in one way or another, but what sets Centrality apart is that developers continue to build functionality into the ecosystem, which is in turn seeing rapid adoption and usage. As the below graphic depicts, the company is currently optimizing its blockchain, code library, and toolkit and is now offering the initial staking of its CENNZ token: 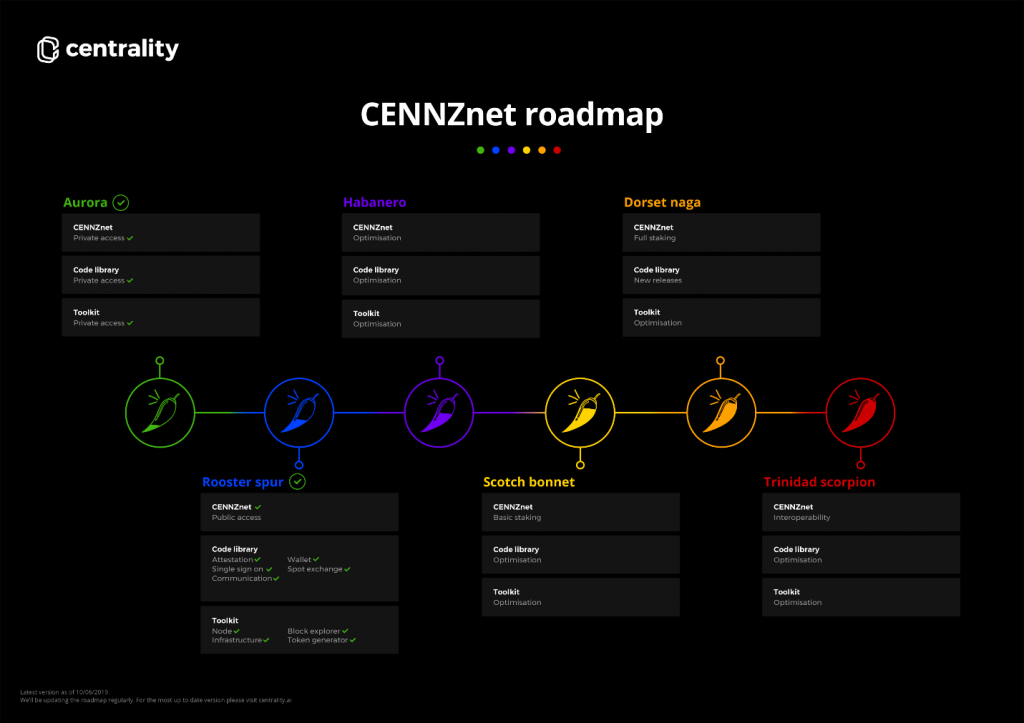 From a “token economics” perspective, the company’s blockchain is secured by a Proof-of-Stake (PoS) consensus. In an innovative dual token economy structure, individuals can stake the publicly-traded CENNZ token to validate the network and earn Centrapay tokens as a reward. Unlike CENNZ tokens, which may appreciate if demand for the Centrality network grows over time, Centrapay is designed to maintain a more stable value, making it a strong medium of exchange and keeping fees stable as the network grows. Users are also incentivized to use Centrapay within the Centrality network. 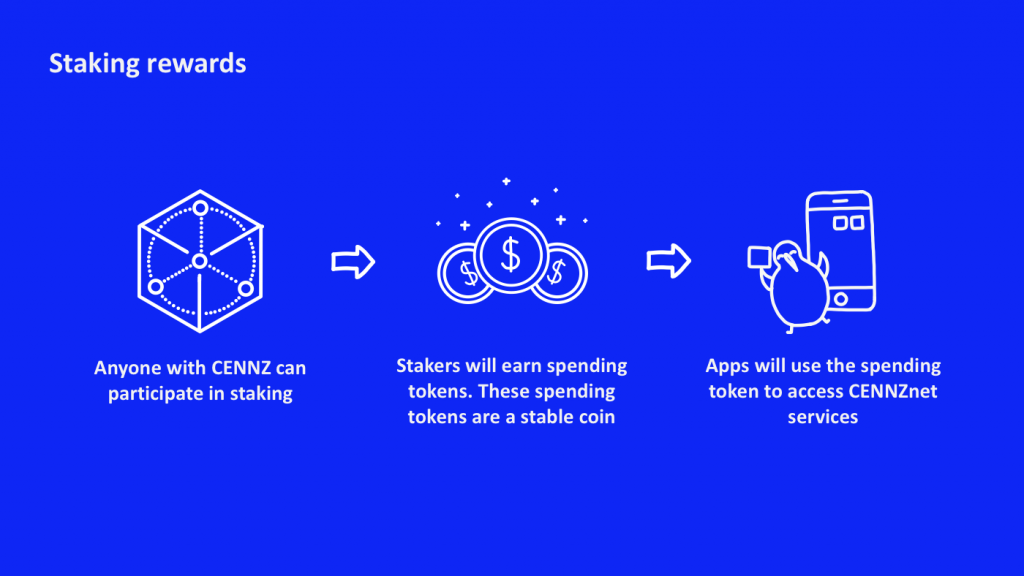 Core Services: A “Business in a Box” for Developers?

Technically speaking, Centrality’s cross-blockchain toolkit PL^G is built on top of Substrate and is compatible with the Polkadot network; in other words, the firm is using cutting-edge technology to build next generation blockchain infrastructure. A major differentiating factor for the company is its patent-pending “Doughnut” protocol that allows permissions and rules to be carried between different networks. In other words, it improves the notoriously unfriendly user experience of most dApps while enabling complex use cases for business partners.

For developers seeking to create new applications, there are four fundamental building blocks to the entire ecosystem:

SingleSource is a decentralized virtual identity and risk scoring platform that gives users full control over how their personal data is used while making it simple for businesses to meet anti-fraud regulations, including KYC (know your customer) requirements. Because the data is stored on a distributed ledger, it is more difficult to manipulate or hack.

Sylo is a decentralized smart wallet, social communication, and data storage platform. According to a recent press release, “Sylo users can connect from the safety of a wallet address, send and receive digital assets in chat, make audio and video calls, and store any ERC-20 compatible token.” Like a privacy-focused version of China’s immensely popular WeChat app.

Centrapay is the Centrality’s payment platform, allowing consumers and businesses to easily manage and exchange digital tokens both within the Centrality ecosystem and wider world.

CENNZX is a cross-chain decentralized exchange focused on making it simple to exchange tokens. Unlike a traditional exchange, CENNZX aggregates prices from multiple providers and automatically gives traders the best price, with no platform fees.

Like a proverbial “business in a box,” utilizing these four core services allows developers to outsource basic functionality, tap into an entrenched, growing user base, and focus their bandwidth on optimizing their unique business proposition. Developers are certainly taking notice, with Centrality’s suite of dApps currently adding 10,000 active users every week!

One promising App utilizing Centrality’s suite of tools is IoMob, the Internet of Mobility. In the company’s own words, “Iomob is a decentralized, open source mobility marketplace that is revolutionizing the rapidly emerging Mobility as a Service (MaaS) marketplace. Iomob lets public transit systems and mobility service providers (MSPs) – ridesharing, bikesharing, e-scooter, taxi companies and more –announce their services via an open protocol, so they can be discovered, combined, booked and paid for using a single app with an integrated experience for the end-user.” By creating an open marketplace, IoMob can expose mobility services for a wide range of apps including hospitality, tourism and government.

By using Centrality’s suite of tools for basic services like identity, payments, and messaging, IoMob is able to focus on growing its core mobility technology. The partnership is already proving a good match: IoMob has pilot programs in forward-thinking cities and nations around the world, including Malmo (Sweden), Madrid (Spain), and Wellington (NZ). The firm has been nominated for “Newsweek Top 25 Global Blockchain Projects for Social Impact”, named among the “Top 10 Smart Cities Startups to watch in 2019” from APAC Business Headlines, and highlighted as a “Top 150 European Startup Prize for Mobility.” With each use case, Centrality’s ecosystem becomes more attractive for future developers, as successful projects are launched using its tools.

As the above analysis shows, the Centrality team is building a unique and compelling ecosystem, suggesting that the CENNZ token’s surge may be more than just a flash in the pan. Unlike the countless “token carnivals” that characterized 2017’s ICO boom, Centrality continues to create infrastructure and services that are attractive to real developers and everyday consumers. While it remains to be seen whether the company will ultimately reach its ambitious goal to “UNf*ck the world,” it’s certainly off to an impressive start from our perspective.

For more on Centrality and the company’s philosophy, visit www.centrality.ai and check out the company’s recent appearances on the NZ Everyday Investor podcast here, here, and here.

*In the interest of full disclosure, several of Blakeley’s contributors are also affiliated with the Centrality team, so readers are encouraged to conduct their own independent research on the project.*