As we noted last December, overall sentiment toward cryptoassets could not have been more dour at the start of 2019: among other issues, the market capitalization of the overall crypto market had cratered from above $800B in early 2018 to just $100B (a nearly -90% decline in just one year), the majority of cryptoassets had no actual use case, and the global regulatory backdrop was more opaque than ever.

Against that backdrop, 2019 was a year of “green shoots” after 2018’s dramatic market correction. Time will tell if 2020 proves to be another year of rampant growth – we’ll be publishing our outlook and predictions for the coming year in January!

While the day-to-day price fluctuations continue to garner all the headlines, underlying adoption and technological advancements are what will ultimately determine the success of cryptoasset networks. When it comes to usage and adoption, 2019 was a year of retrenchment. As the chart below shows, transaction volume in Bitcoin and Ethereum, the two largest networks, was essentially flat over the course of the year:

Contrary to bullish forecasts at the start of the year, the stagnant growth of on-chain transactions cannot be attributed to growth in off-chain alternatives like Bitcoin’s Lightning Network, which still only offers $6 million in channel capacity. Meanwhile, when it comes to smart contract platforms, developers created roughly 60 new decentralized applications (dApps) per month over the latter half of the year, down from the 100+ new monthly dApps launched throughout 2018: 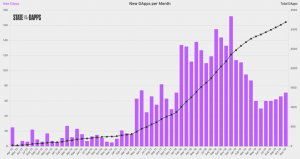 That said, there were pockets of strength in terms of adoption. Powered by Basic Attention Token (BAT), the privacy-focused Brave browser recently exceeded 10M monthly active users, proving that quality products with strong use cases can be built on the blockchain. Likewise, fintech company Square’s Cash App found success by making it easy and intuitive for retail investors to buy bitcoin; purchases on the app reached nearly $150M last quarter, with first-time buyers doubling in Q3 alone: 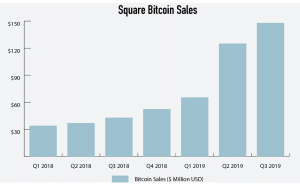 When it comes to technological advancements, 2019 reminded us how nascent the crypto industry truly is. Even Ethereum, one of the most “mature” networks, was forced to embark on a wholesale, multi-year upgrade to its blockchain, potentially opening the door for more technologically advanced competitors like Dfinity, Tezos, and Polkadot to capture more of the smart contract platform market share.

As we head into 2020, the lessons from last year’s technological and adoption trends are clear: developers must create services with strong product-market fit and intuitive user interfaces on a strong technological foundation that can accommodate heavy usage efficiently and affordably. The projects that are able to balance these competing needs are likely to be successful in 2020 and beyond.

In a dollop of good news, regulators made significant strides in defining and communicating their perspectives on cryptoassets in 2019. For one, the UK’s Financial Conduct Authority (FCA) issued guidance on cryptoassets, bringing some much-needed clarity to developers and marketers looking to attract capital. On mainland Europe, even stodgy, conservative Germany passed a law allowing banks to offer cryptoassets and custody services to customers starting in 2020. Across the Atlantic, the US’s Securities and Exchange Commission (SEC) brought cases against some of the more questionable initial coin offerings (ICOs) like Paragon, while the Internal Revenue Service (IRS) issued guidance on taxation of cryptoassets.

While some of these regulatory decisions are far from perfect, regulation is inevitable for any legitimate industry, and all stakeholders benefit from well-informed, balanced regulations. For more on the regulatory outlook and the prospects for a global AML/KYC framework, see our interview with MME founder Dr. Luka Müller.

Looking back, several of our predictions throughout 2019 proved prescient. When it comes to Bitcoin, we ended 2018 by noting that despite the near-term difficulties, “In the long run, betting against Bitcoin’s technology, revolutionary incentive structure, and strong network effects has been a fool’s errand, and we don’t expect that to change moving forward.”

In contrast, we were more downbeat on the prospects for Ethereum, noting that “Despite a 90%+ price drop from its peak at the start of the year, the network still faces significant headwinds

as its previous major use case (fundraising via ICOs) continues to contract amidst poor investor returns and regulatory uncertainty.” As the chart below shows, Bitcoin is poised to nearly finish 2019 up nearly 90% from the start of the year, while Ethereum (along with most other altcoins) has gotten cut in half again: 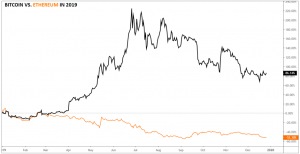 Lest we toot our own horn too much, not all our predictions from the past year played out as expected. In particular, it’s looking increasingly likely that we were too bullish on the prospects for Facebook’s Libra stablecoin. Clearly, Libra’s creators severely underestimated the global regulatory pushback against the proposal, and with many of the initial sponsors dropping out of the project, the idea of a 2020 global launch for the project looks laughably naïve.

Meanwhile, our concerns about vulnerabilities in the global financial system, the potential for cryptoassets to outperform in a global financial crisis, and Ethereum’s possible susceptibility to upstart competitors may well be hashed out over the next twelve months.